2010.10.10We spent our last day in Egypt at Luxor. The current location of Luxor was city of Thebes in ancient Egypt. Pharaohs built temples and palaces at the East Bank of the Nile River, while dug their tombs deep in the valley of the West Bank, hoping that their priceless possessions buried with them would not be found by robbers. They badly underestimated the robbers’ skills and determination. Only a handful tombs remained intact today. One of them is Tutankhamun‘s tomb. When it was discoverd in 1922, the glorious treasures inside the tomb astounded the world.

More than sixty pharaohs’ tombs have been found in the hills of West Bank. It is called Valley of the Kings. It was the first stop of our West Bank trip in the morning. The camera was strictly forbidden, so no picture was taken inside the valley. The ticket is valid for 3 tombs, and some of the tombs require separate tickets. Our guide book marks the tombs that are worth visiting, but it is easy when you are on site. You just need to follow the longest lines. Those are the must-see for the first-time visitors. What we went to are, Romb of Ramses IV (No.2), Tomb of Horemheb (No.57) and Tomb of Ramses III (No.11). Most these tombs share similar structure, a long declining corridor leading to the burial chamber. Although the precious were all taken, some of the paintings were burned or damaged, what remain are still stunningly beautiful. Because the sunshine cannot reach the corridor wall, colors are vividly preserved. Only several colors were used in Egyptian reliefs, yellow, red, green and blue. They are the same colors used on reliefs in temples, but they disappeared overtime exposing under the sun. These dramatic structures made me wonder, if they could make my jaw drop three thousand years later, what a grand view would be when they were originally constructed. The only thing that prevented us from exploring more was the heat. It was unbearable if you were not standing in the shade. Inside the tomb was especially stifling.

We then went to Hatshepsut Temple. Hatshepsut was a female pharaoh. It’s uncommon but not unprecedented. She is considered as one of the most successful pharaohs because she brought peace and prosperity to Egypt under her reign. The wealth enabled her to construct breath-taking buildings, such as the Hypostyle Hall in Karnak and Hatshepsut Temple. What is interesting is that although here statue is presented as a male with a beard, the face is having a soft contour of a female. 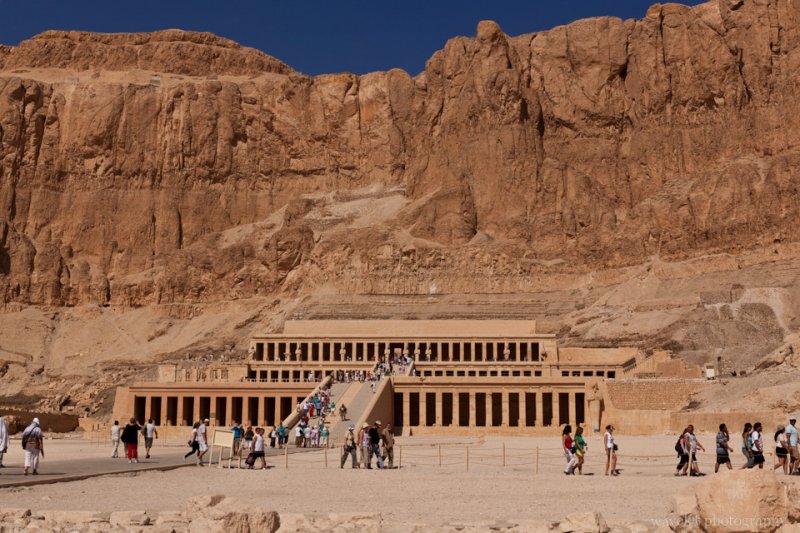 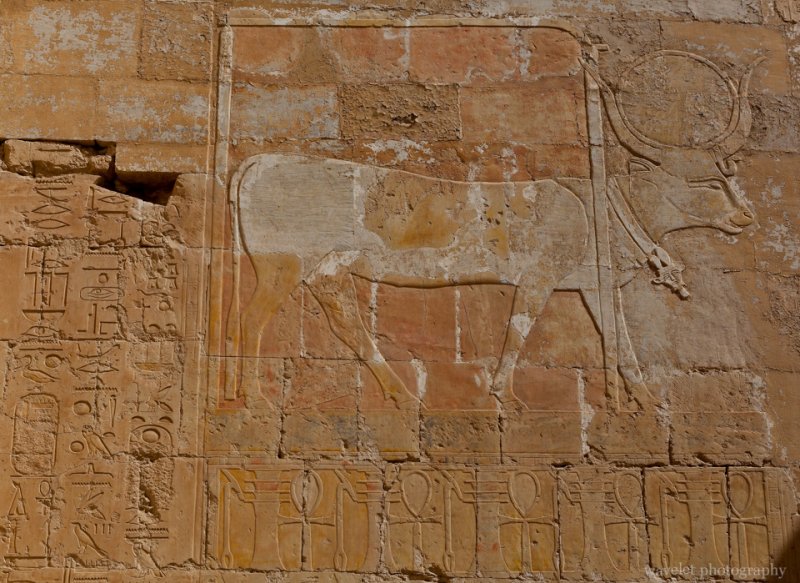 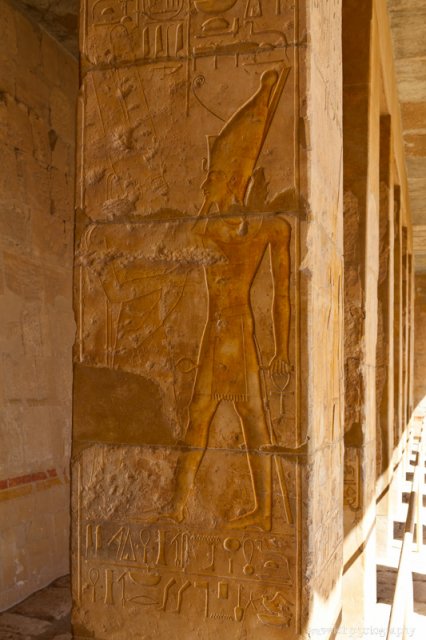 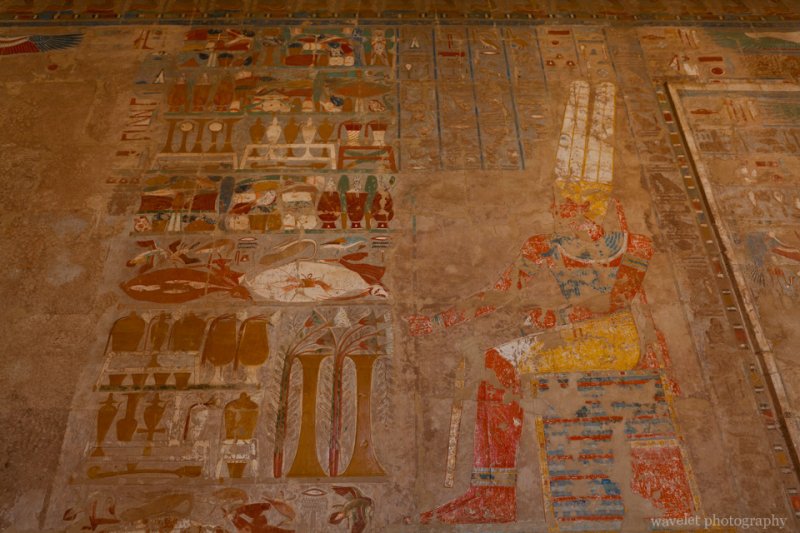 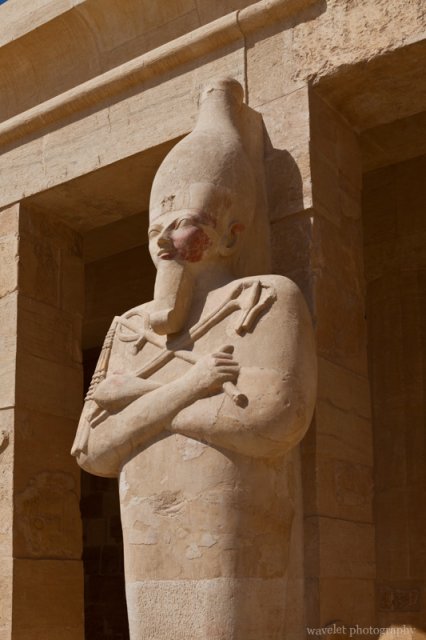 If we had more days in Luxor, I’d like to come to West Bank every morning, ramble around the rubbles and ruins. But my passion could not withstand the burning sun. October marks the beginning of tourist season in Egypt. In December, the temperature at noon could drop to 80F (25C), which is more comfortable. Before leaving West Bank, we quickly stopped at Colossi of Memnon. These two colossi are faceless now damaged by the annual flood of the Nile over thousands of years, but because of their sheer size, it is still a very impressive sight and one of the most recognizable landmark of West Bank. 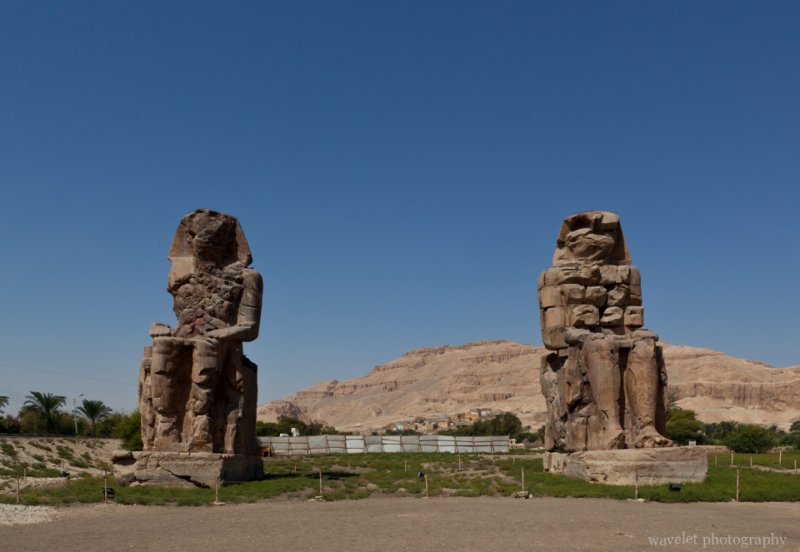 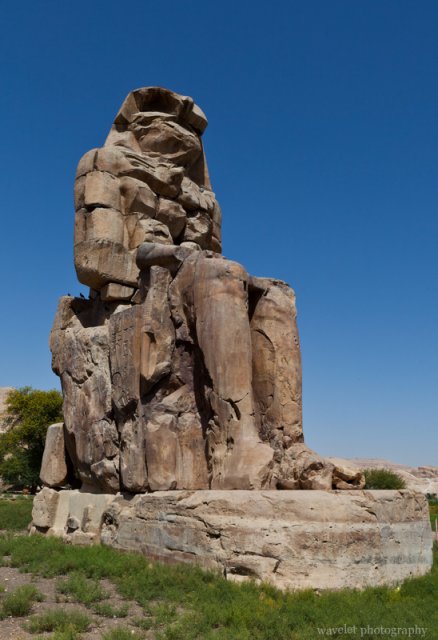 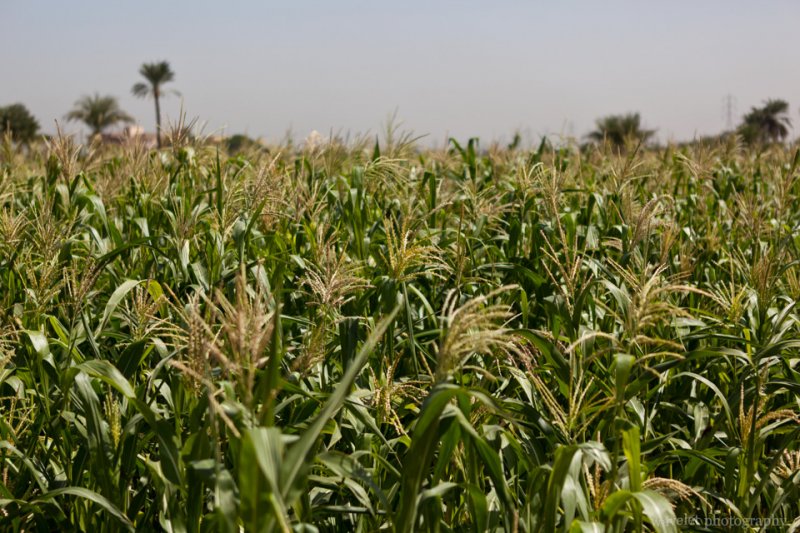 We rested at the hotel in the early afternoon. The last attraction we were going to visit is Luxor Temple, which is in walking distance from the hotel. We had a small meal at McDonald’s across the street of the temple. From its third floor, we had a good view of Luxor temple and the city center. We had several meals at McDonald’s in different cities in Egypt. I have to say they are the best McDonald’s I have ever been to. What you get is not something that has been pre-cooked long time ago like in the American stores. Fry’s, Fish Hamburger and Chicken Nuggets were always fresh, tender and hot, just made for you. 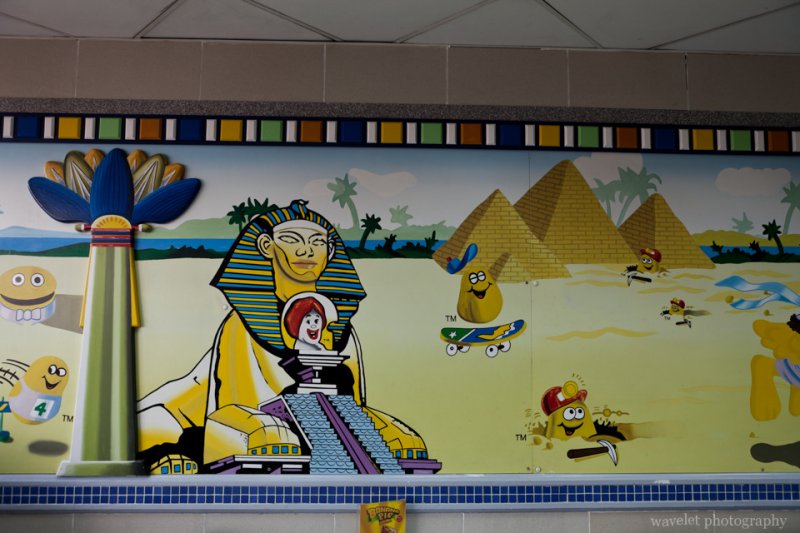 We entered Luxor Temple at around 4pm. Luxor Temple is connected to Karnak through an avenue of sphinxes. A gigantic pylon as its entrance features a huge obelisk and two seated colossi of Ramses. In side the temple, besides the high-rising columns, statues and squares, you can also find a mosque and Egyptian reliefs covered by Christian paintings, indicating the temple has been used for other religious purposes in its three-thousand-year of history. 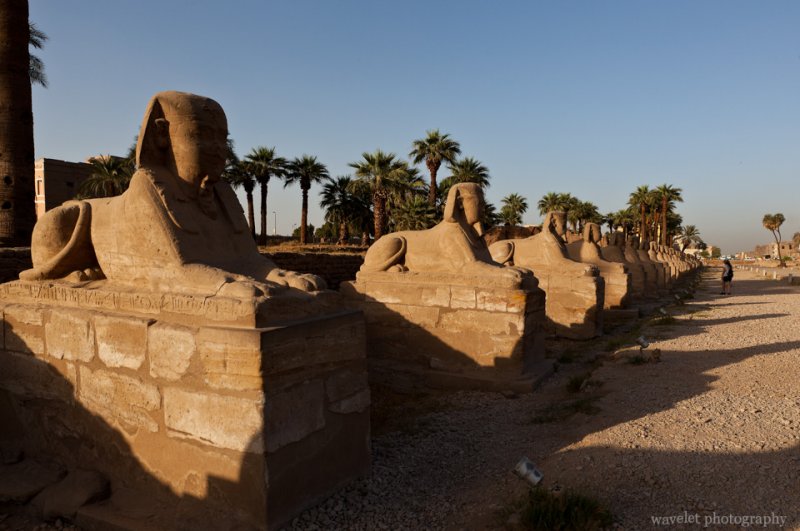 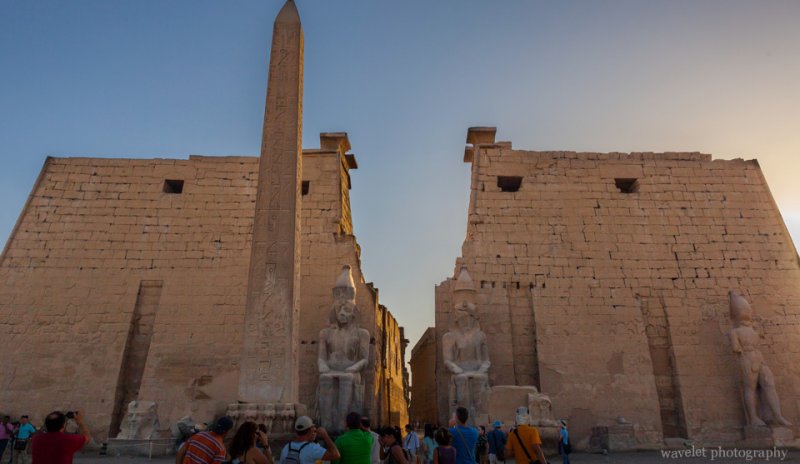 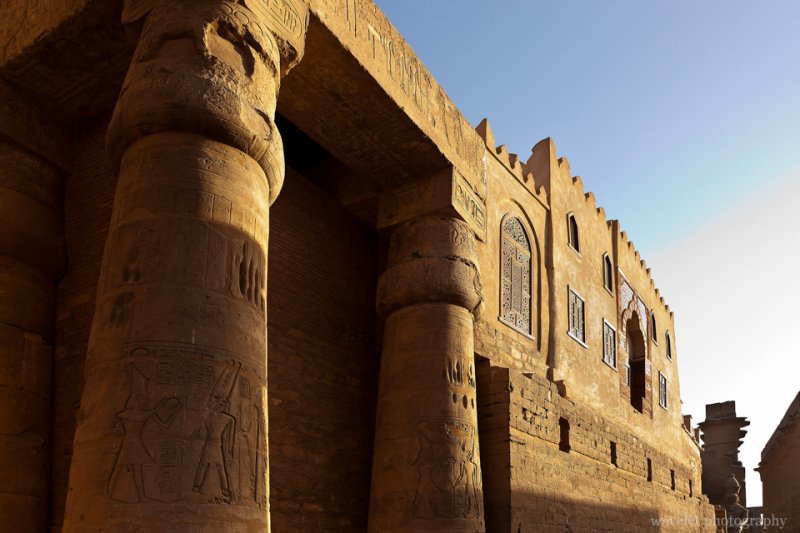 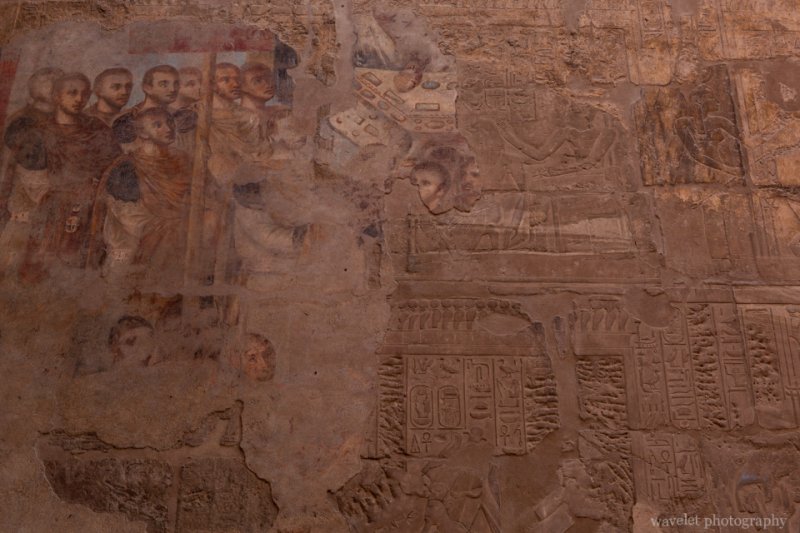 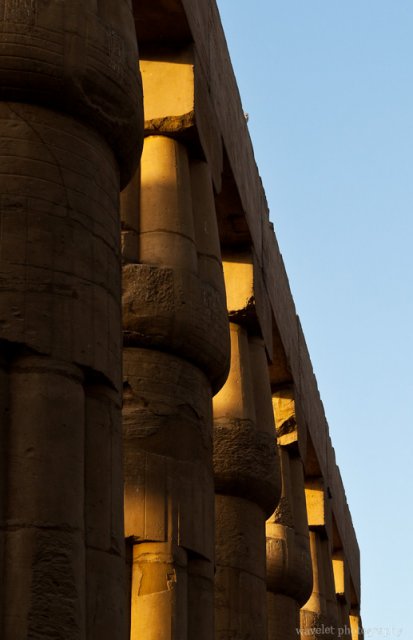 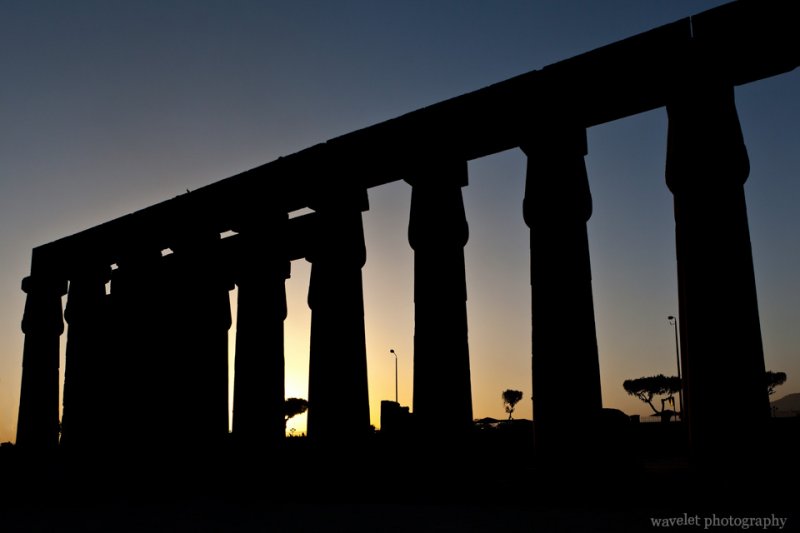 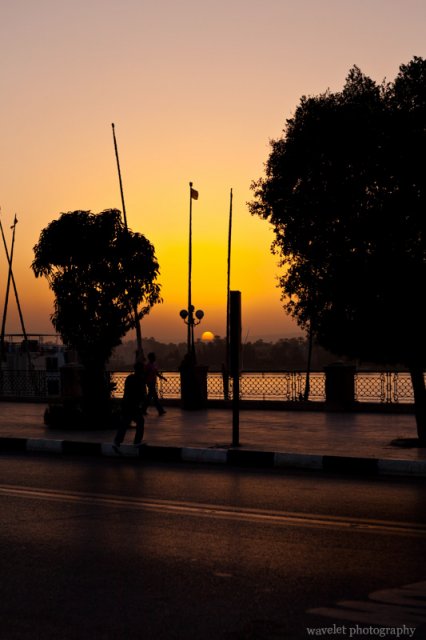 We had one of the best buffet dinners at the hotel. There were many local dishes and vegetables, onion, olives, tomatoes, beans, stuffed vine leaves and cheese, simple but elegant.